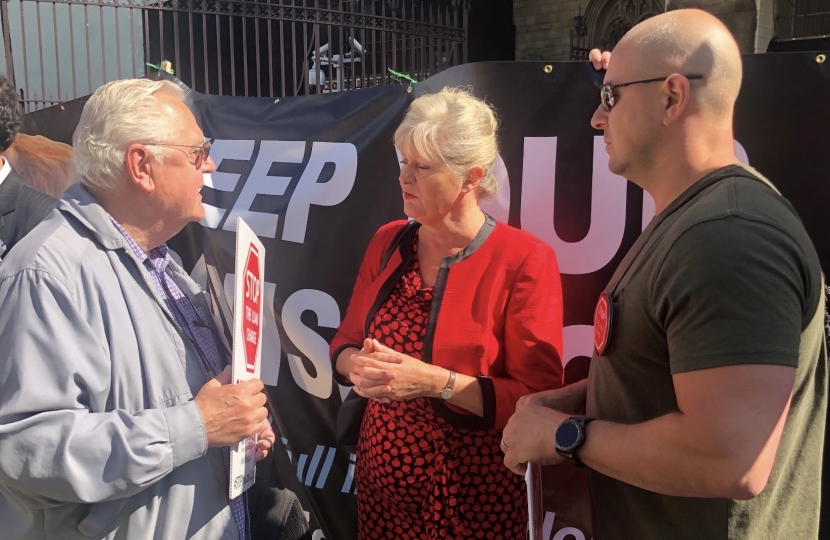 Anne Main MP has shown her support for constituents who are opposed to the Loan Charge by attending the Loan Charge lobby day last week in Parliament. The Loan Charge relates to a policy shift on all disguised remuneration schemes through loans made since 1999. For those affected, mostly self-employed workers, there will be a 45% charge on all loan payments paid out in the past twenty years. Individuals will be expected to pay these tax bills in one go and this could have a crippling impact on these individuals' finances. Anne has been contacted by a number of constituents who have been impacted by this change in policy. Some of whom face bankruptcy as a result of being pursued for payments by HMRC. At the Loan Charge lobby day Anne was able to reassure constituents that she will continue to campaign for a change to this policy. Anne had previously spoken up on behalf of constituents during a Finance Bill debate in January 2019 and in August 2019 she wrote to the Prime Minister expressing her concerns about the punitive nature of this tax. As a result of campaigners and MPs efforts, Prime Minister Boris Johnson confirmed his commitment to have a thorough review of the policy during Prime Minister’s questions on 4th September 2019. In response to this announcement Anne stated: “I am pleased that the government is listening to the publics’ concerns about this retrospective tax and HMRC has decided to delay a number of tax settlements as a result of the Prime Minister’s pledge to review the policy. “I have been contacted by constituents who have been seriously affected by the Loan Charge and I have written to the Treasury about individual cases. It always saddens me to hear how families lives have been completely disrupted by this unfair tax. “I hope this news comes as some relief to constituents affected by the Loan Charge, many of whom have experienced months of uncertainty. It is deeply troubling that the impact of the charge has been so serious that a number of suicides have been reported in connection with the tax. “I will continue to monitor the progress of the review which will hopefully result in a much more fair and manageable repayment process.”