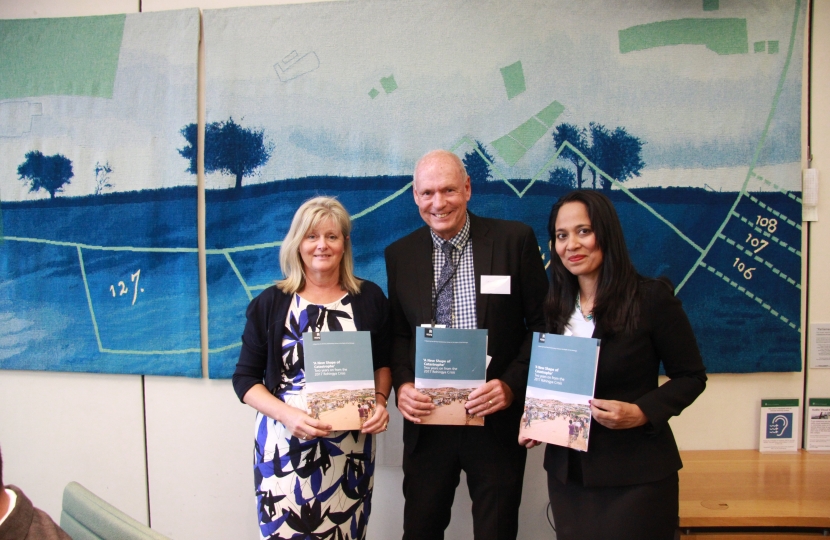 This week in Parliament, St Albans MP Anne Main launched her report on the Rohingya refugee crisis. Mrs Main’s APPG on the Rights of The Rohingya produced the report following the two-year anniversary of the mass exodus of Rohingya refugees crossing the border from Myanmar into Bangladesh in August 2017.

The cross-party group of MPs warned that continued violence and discrimination against the Rohingya in Myanmar mean conditions are still unsafe for returns, leaving Bangladesh hosting over a million refugees. The report also urges the UK Government to step up pressure on Myanmar, including introducing tougher sanctions and referring the situation to the International Criminal Court.

The report condemns the impunity for the atrocities of August 2017, described by UN officials as ‘ethnic cleansing’, which forced more than 700,000 Rohingya people across the border to Bangladesh. The report calls for measures to increase diplomatic and economic pressure on the Government of Myanmar, including by working with the European Union to expand targeted sanctions to include companies run by the military. It also calls on the UK Government to use its leadership role at the UN Security Council to draft a resolution that refers the situation to the International Criminal Court.

The report praises the Government of Bangladesh, which has opened its border to hundreds of thousands of refugees and is leading a vast humanitarian response that has saved thousands of lives. It recognises the leading role the UK has played by providing financial support for the response, but warns the global response is grossly underfunded and lacks a clear plan to coordinate longer-term investment and improvements on education, healthcare and opportunities to work that would benefit refugees and Bangladeshi residents of Cox’s Bazar.

Following the launch of the report, Mrs Main said:

“When I visited the camps in Bangladesh two years ago, I was horrified by the stories Rohingya people told me of the violence and trauma they had endured. Thanks in large part to the enormous generosity of the Government of Bangladesh and international donors, conditions for Rohingya men, women and children are improving.

“However, given the conditions in Myanmar, it is likely that refugees will remain in Cox’s Bazar for years to come. The UK has an opportunity to be a key player in efforts to work together with the Government of Bangladesh to deliver a sustainable response that ensures both Rohingya refugees and local residents can prosper both in Bangladesh, and ultimately when refugees return home.

“We have worked hard to produce a report that gives clear and well researched recommendations for the Government to act on. I hope this report goes some way to increasing the national, and hopefully international spotlight, on this crisis once again. Attention has moved away over the last few years and we must re-engage this Government and our partners to act to bring justice, accountability and support for the Rohingya refugees.”

Download the full report “A New Shape of Catastrophe”: Two years on from the 2017 Rohingya Crisis here: https://drive.google.com/file/d/17k1ZfHiWTqiSaKkxNK2F031nGcDhAcL-/view?usp=sharing

The report was launched on Tuesday 10th September in the Boothroyd Room, Portcullis House, Houses of Parliament.

The All-Party Parliamentary Group on the Rights of the Rohingya was launched in January 2018 as a space for UK parliamentarians from across the political spectrum to campaign for the protection and promotion of the rights of Rohingya refugees living in camps in southern Bangladesh, as well as those who have been internally displaced in Myanmar.

The APPG launched an inquiry in May 2019 into the experiences of the Rohingya in both Myanmar and Bangladesh, and the key humanitarian, development, economic and political challenges posed by the crisis. It held two oral evidence sessions and received written evidence from NGOs, academics, the UK Government and representatives of the Rohingya community.

UK Parliament Disclaimer: this e-mail is confidential to the intended recipient. If you have received it in error, please notify the sender and delete it from your system. Any unauthorised use, disclosure, or copying is not permitted. This e-mail has been checked for viruses, but no liability is accepted for any damage caused by any virus transmitted by this e-mail. This e-mail address is not secure, is not encrypted and should not be used for sensitive data.