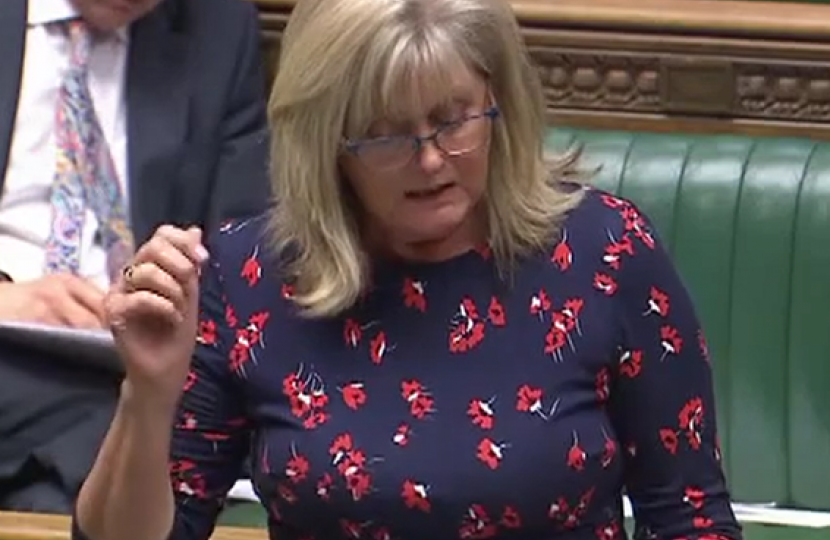 On Monday 14 October, the Queen's Speech was delivered to both Houses of Parliament marking the start of a new parliamentary session and outlining the Government’s legislative priorities.

Mrs Main spoke in the debate on the Queen’s Speech to welcome the bold domestic agenda that will benefit her constituents in St Albans.

While Anne supported many of the announcements made, she reaffirmed her commitment to continue pressuring the Government to review business rates. She said, “I will still be pressing for a review of business rates, because the current model based on property values is not fit for the modern business economy”.

Anne has met with a number of pub and business owners who have expressed their concern that the current rates punish small businesses located in areas with high property value such as St Albans.

Mrs Main wants to see a system that helps all small businesses and pubs to thrive.

Regional investment in local businesses was made a priority in the Queen’s Speech with the Government announcing that by March 2021 the local growth fund will have invested £12 billion in projects to boost jobs and growth across England. Anne highlighted how this fund had made projects such as the Hertfordshire enterprise zone possible, creating 8,000 new jobs.

On schools, Anne said she was proud the Government was ending the postcode lottery when it came to funding and was committed to ensuring a fairer funding system for all schools. This is an issue Anne has passionately campaigned on at all levels on behalf of St Albans schools.

During the debate, Anne said:

“The schools in my constituency will hugely welcome this injection of funds. St Albans schools will now see an increase in funding above the new minimum levels of per-pupil funding. The average amount in St Albans will be £5,161 per secondary school pupil and £4,123 per primary school pupil. I welcome that.”

Anne reiterated that she was pleased to hear this Government had pledged to protect parental choice and respect diversity within the education system that includes independent schools.

Mrs Main praised the Government’s introduction of it’s landmark environment legislation to tackle environmental priorities. Anne is a long-term environmental campaigner and established the cross-party group in Parliament on the prevention of plastic waste.

Anne made it clear that she still had some concerns about how noise pollution was being dealt with, an ongoing issue for St Albans’ residents, who have been affected by the growth of Luton Airport and resurfacing works on the M1. Anne said, “I will be pressing for the inclusion of noise pollution in the Environment Bill, as it seems to be overlooked by many of those campaigning for our environment.”

Mrs Main also commended the Prime Minister’s determination to deliver the 2016 referendum result and urged her parliamentary colleagues to back a deal.

Anne made it clear during the debate that any attempt to overturn the referendum would be an affront to democracy and argued that “any party that refuses to acknowledge and try to carry out the direct democratic mandate of the people should lose the right to call themselves democrats.”

The Queen’s Speech debate touched upon many issues that matter to St Albans including policing. The Government is committed to recruiting an additional 20,000 police officers over the next three years. Hertfordshire is to gain almost 100 more front-line police officers within 18 months.

On the issue of policing, Anne said: “I was pushed for time during the debate, but I would like to add that I am hugely encouraged that my constituency will directly benefit from the Government’s police recruitment drive. By the end of March 2021, Hertfordshire Constabulary will have 2,100 officers, its highest number since 2011, and this is excellent news for all residents.”