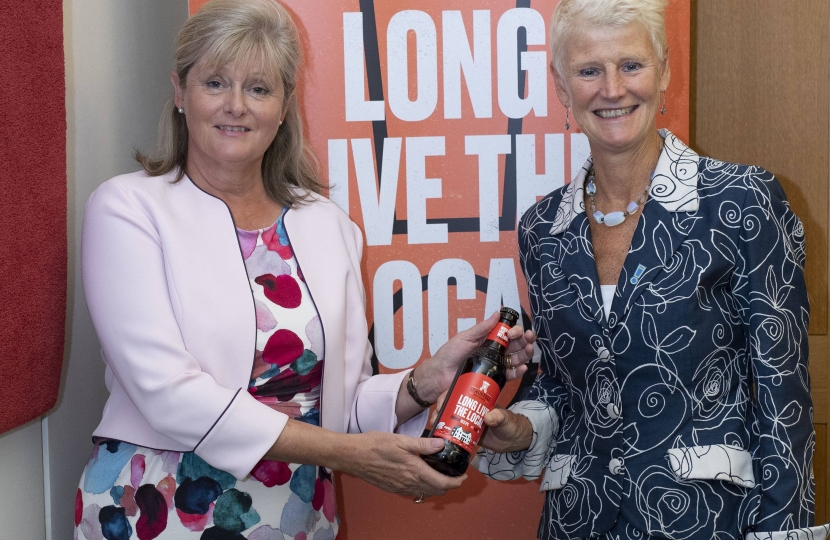 Anne Main MP has continued her support for the Long Live the Local Campaign to help pubs in St Albans keep their doors open. Anne Main joins the more than 150,000 people who have signed the petition so far, including 223 in St Albans.

Anne Main MP is calling on the Government to cut beer tax at the Budget. With £1 in every £3 pounds spent in UK pubs going to the taxman, British drinkers now pay 40% of all beer tax across the EU, but drink only 12% of the beer. Brewing and pubs in St Albans supports 1605 jobs and contributes 40.7 to the local economy.

“Pubs are at the heart of communities across St Albans, but with three British pubs closing their doors for good every day the Government should consider a cut to beer tax. I’m delighted to continue to support the Long Live the Local campaign and  I am calling on the Chancellor to cut beer tax at this year’s Budget to support pubs.

“Pubs are vital to our local community in St Albans and I will continue to champion them in Parliament. The government must do more to help businesses like our pubs who are unfairly impacted by the tax system.”

“Beer duty has increased by 60% over the last 17 years and now the UK has one of the highest rates of tax in Europe. When over two thirds of all alcoholic drinks purchased in the pub are beers, a cut in beer tax would go a long way to protecting pubs across St Albans. We are very grateful to Anne Main for their support for the Long Live the Local campaign, and hope that the Government listens to MPs across Parliament and the thousands of people across the country who are calling for a cut in beer tax to protect our pubs.”

Long Live the Local is a campaign backed by Britain’s Beer Alliance. The campaign celebrates pubs whilst educating the British public about the challenges they face, specifically a tax burden which is set to grow year on year. The Alliance consists of over 120 members, and members range from individual publicans and microbreweries to the UK's largest pub chains and international breweries.

Further information about the Long Live the Local campaign can be found via www.longlivethelocal.pub

Beer Duty (tax) in Britain is three times the EU average.
Of those alcoholic drinks purchased in the pub, 7 in 10 are beers. The government collects £3.5 billion every year in Beer Duty, as well as almost £10 billion in other taxes on pubs and brewers. Today one in every three pounds spent in pubs goes to the taxman and On average, each pub in the UK pays more than £140,000 a year in tax. Along with Business rates and VAT, Beer Duty is putting pubs under enormous pressure; every day pubs are closing their doors for good. Compared to Germany, another of Europe’s great beer-drinking nations, we pay twelve times their level of beer tax on each pint. The last time Beer Duty increased year on year was between 2008 and 2013 when the government put a Beer Duty escalator in place. The impact on the beer and pub sector was catastrophic, within 5 years there was a 24% decline in beer sales, 5,000 pubs closed and 58,000 people lost their jobs.

Beer duty is a tax paid when producing and selling beer and is calculated based on the strength of the alcohol. Beer duty has increased by 60% over the last 17 years and now the UK has one of the highest rates of duty in Europe. With seven in every ten alcoholic drinks served in pubs being a beer, Beer Duty increases have a big impact on pubs and it’s set to rise every year for the foreseeable future; as it is linked to the Retail Price Index (RPI) which all but guarantees annual increases.

Business rates are taxes paid on non-residential properties like shops, offices, factories, and pubs. Rates are generally calculated based on a property’s rental value, usually on a square footage basis. However, for pubs it is a calculation based on ‘fair maintainable trade’ as determined by an independent assessor. The way the business rates system works has a disproportionate impact on pubs compared to other types of business (e.g. on-line businesses), the average pub today pays a business rates bill of £15,000 meaning around 4% of its turnover is paid in Business Rates alone. Following recognition of the unfair burden faced by pubs, a new pub-specific relief for smaller pubs was introduced in 2017 in the form of £1,000 of their annual tax bill, but this is set to end in March 2019, further increasing the pressure.

Pubs, along with other licensed venues such as restaurants and bars, have to pay VAT on all food and drink they sell. This is not consistent with other food outlets, as food sold through supermarkets, convenience stores and takeaways (including cafes) does not pay VAT on most food products.

UK Parliament Disclaimer: this e-mail is confidential to the intended recipient. If you have received it in error, please notify the sender and delete it from your system. Any unauthorised use, disclosure, or copying is not permitted. This e-mail has been checked for viruses, but no liability is accepted for any damage caused by any virus transmitted by this e-mail. This e-mail address is not secure, is not encrypted and should not be used for sensitive data.