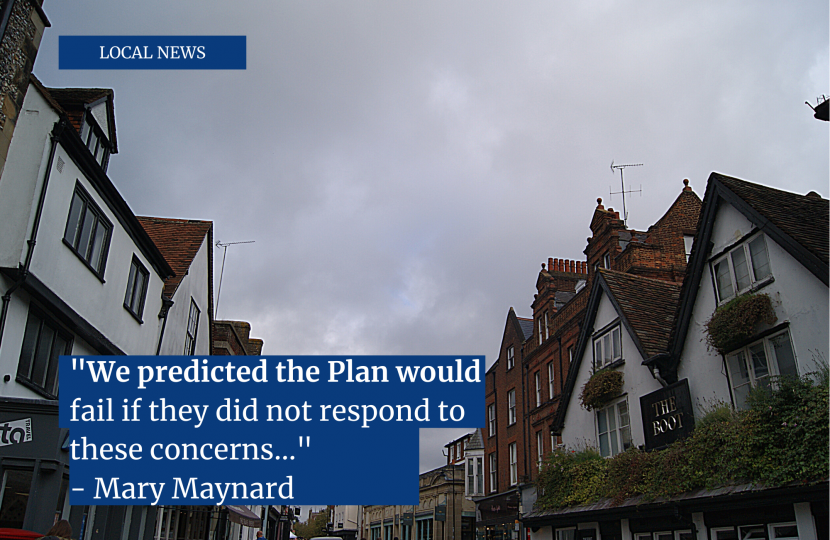 The independent Planning Inspectorate has offered St Albans and District Council two options on the Local Plan.  They can either withdraw their Local Plan from examination or they will recommend it is not adopted because of a failure to discharge the Duty to Co-operate with other Councils.

Following the Inspection earlier in the year, the Council was sent a list of the Inspectors’ concerns.  They covered a wide range of technical planning issues.  Conservative Councillors proposed that each of the issues was reviewed using a measured, professional approach and that the Inspectors were then sent detailed responses.  This would have demonstrated that the Plan had met the Duty to Co-operate criteria.  The Inspectors sent their letter in the clear hope of obtaining this sort of response.

Instead, the Liberal Democrat administration decided to take a political grandstanding approach.  They removed housing from one of the planned sites, replacing it with a Strategic Rail Freight Interchange (SRFI). This was done after extensive lobbying by the developers and landowners.  The Conservative Group warned them this was a ridiculous action doomed to failure, as the Inspectors wanted their questions answered.  The questions were never answered so the Inspectors failed the Plan.

Cllr Mary Maynard (Leader of the Opposition and the Conservative Group) stated;

‘We are disappointed.  This minority Liberal Democrat administration do not listen.   They have been responsible for the Local Plan for 18 months.  In that time, they cancelled most of the Committee meetings dealing with the Plan and excluded Conservatives from any involvement in decision making. They did not listen to our advice that we needed to address the Inspectors’ concerns and refused to do so.  We predicted the Plan would fail if they did not respond to these concerns.  Instead, they chose the easy political ‘stunt’ of removing a contentious housing site.  This inevitably caused the Plan to fail.

There was a clear factual and legal argument to be made on the Duty to Co-operate requirements of the Local Plan.  Instead of doing the work needed to assemble this argument, the Liberal Democrats caved into developer pressure.  Developers and landowners will make millions of pounds from a change to the Plan, so of course they put on pressure.  The Liberal Democrats need to start listening to our advice and work together for the sake of all our residents.  It is the only way we will get the social housing and affordable homes we so desperately need.’