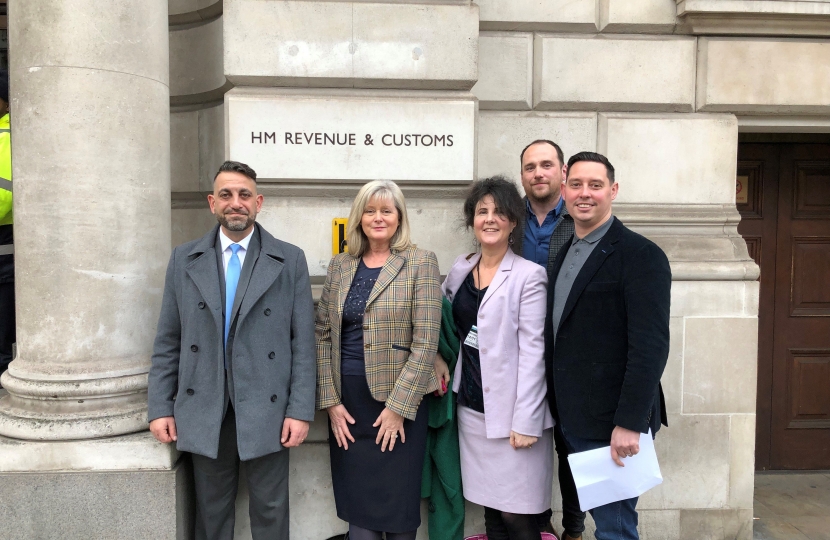 Members of the the St Albans Save Our Pubs group (Sean Hughes, Christo Tofalli, Mandy McNeil and Alan Oliver)  went to Westminster to lobby for a review business rates to save St Albans pubs. Along with St Albans MP Anne Main they held a meeting with Exchequer Secretary to the Treasury, Robert Jenrick MP about the impact of business rates on pubs.

Concerned about this issue, Anne has visited many pubs in St Albans in November, and she  committed to raising this issue in parliament and with treasury ministers.She has also secured a debate in Parliament tomorrow on the negative impact business rate reform has had on many pubs and businesses in her constituency.

The business rate relief announced by the Chancellor in his budget in October provides a third off business rates for businesses with a rateable value of £51,000 or below. However, in expensive areas like St Albans, this reduction has not helped the majority of pubs, who have seen an increase in their business rates.

Save St Albans Pubs made their case to the treasury minister, saying that the announced cut in rates “hasn’t help in St Albans”

Speaking after the meeting, Anne said, “Save St Albans Pubs made an excellent case to the Minister. The government have to realise that this formula for calculating the rates is not helping to support local businesses and pubs in high value areas like ours. The system of taxing turnover and property value has meant that the aim of the cut will not help in areas like mine.

“I hope the Minister will engage with pubs in my constituency and the Treasury will consider offering a one third cut on rates up to the first £51,000. The current cliff edge of businesses with a rate of over £51,000 has not helped the many great pubs in St Albans. I will once again make the case for pubs and local businesses in St Albans tomorrow during my debate on this issue.”